When I visited my parents earlier this month I had high hopes of gleaning some facts and solving some mysteries. Alas, my parents didn’t have the information I sought.

I did, however, go through a box of old photos in my mother’s closet that she had taken after her mother died. They were mostly photos that her mother-in-law had collected. Unfortunately, most weren’t labeled, but there were some gems in there. 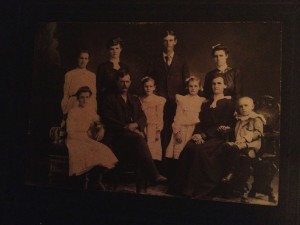 My great-grandmother’s family, in 1903, in Nebraska

Here’s one of my favorites. It’s my great-grandmother, Rhoda Wheeler, before she became Rhoda Brown. The photo was taken in 1903 and the family lived in Carleton, Nebraska (Thayer County). Rhoda’s father owned a hotel. That’s her in the back row, second from the left. She’s only 16 in the photo. Those are her identical twin sisters in the middle. There were many photos in that box of the twins through the years.

(Click on the photo, then, if necessary, click on it again in the next screen and you can take a good look at this family.)

Photos like these always amaze me because they feel so real. The expressions are so dour, you wish you could read their minds. I look forward to learning about all the people in this photo!