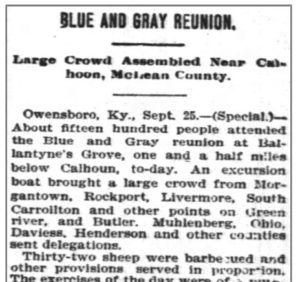 This doesn’t have anything to do with organizing, but I wanted to share information from a newspaper article I found last year that mentions my great great grandfather, George Washington Adams. The event described in it blew me away.

The article, headlined “Blue and Gray Reunion,” appeared in the Courier-Journal of Louisville, Kentucky, on September 26, 1897, 32 years after the end of the Civil War. It describes a gathering near Calhoun, Kentucky, of Civil War veterans from both side, attended by 1500 people. They came from near and far.

“Thirty-two sheep were barbecued and other provisions served in proportion. The exercises of the day were of a purely patriotic and fraternal character,” the article states. My second great grandfather, George Washington Adams, headed the Union veterans, while Capt. Henry Ballantyne headed the Confederate veterans.

I’m visiting my father and when I was updating him on his ancestors and told him about this event, it gave me pause to envision it. I was so impressed that such an event would happen; I imagine it wasn’t the only event of its kind. That veterans who had fought against one another could come together three decades later for a giant barbecue fills me with awe.

The story concludes, “The day passed without an unpleasant incident of any kind.” Impressive.

Have you come across newspaper accounts in your genealogy research that blew you away?