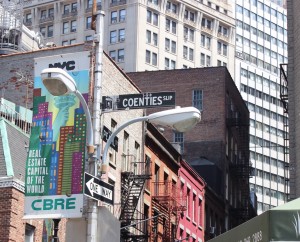 Last weekend, I played tourist in New York City with my twenty-year-old niece, Miranda, who is Australian. She was making a stop in New York en route from Costa Rica back to her home in Australia and invited me to join her in the Big Apple. How could I say no?

She had a long list of sights she wanted to see on her first visit to New York (and we saw most of them). I had just sight on my list: A little street named after our ancestor. Thankfully, Miranda had enough interest in our family history to jump at the chance to go with me to see Coenties Alley.

Thanks to the  genealogy research done by my mother’s first cousins Jerry and Judy Brown, I know that Miranda and I are descended from Conraet Ten Eyck, who emigrated to New York City (then New Amsterdam) in the mid-17th century. He made a good living as a tanner and shoemaker and had sizable property near the area of Lower Manhattan now known as Coenties Slip.

I had heard about Coenties Alley and Slip more than a decade ago, but this was my first visit to New York where making a pilgrimage to that spot was feasible.

Here’s a photo Miranda took of me in Coenties Alley. (She also took the photo of the Coenties Slip street sign, above.)

One of the things that I love about genealogy research is how it brings history to life. Having this connection to lower Manhattan gave that area new meaning to me. And it was wonderful to be able to share it with my niece!