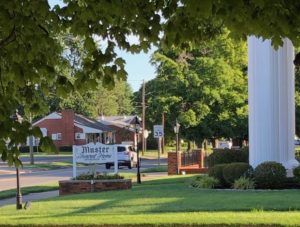 I’m in the midst of my research trip to Kentucky and this morning I really felt the power of walking where my ancestors walked. This morning, I was sitting on the porch of Farley’s Bed and Breakfast in Calhoun, McLean, Kentucky, enjoying a cup of coffee on a lovely morning. As I looked at the impressive building across the street, I noticed the sign Muster Funeral Home, established 1855. It occurred me that this was probably the funeral home some of my ancestors used.

Since my laptop was in my lap, I took a quick look at the death certificate for Bonnie Adams, the daughter of my great great grandfather, George Washington Adams (who is the primary focus of my research on this trip) and his second wife, Della. Bonnie died in 1919 at the age of six, from influenza. I knew they were living in Calhoun at the time of her death. Sure enough, the undertaker was Muster.

Yesterday morning, I had gone to Calhoun Cemetery and looked at young Bonnie’s grave marker. George and Della had a tumultuous relationship that ended in divorce a year after their daughter’s death. I can imagine that their grief on top of an unhappy marriage was practically unbearable.

Being right there where they were, both near the funeral home and the grave site, really brought home the power of these trips. I felt like I knew my ancestors better and could understand just a little more what his life was like.

I’ll write more later about this trip, but I can say with assurance that no matter what I discover in the libraries and repositories this week in Kentucky, just walking in the shoes of my ancestors in McLean County has made this trip worthwhile.