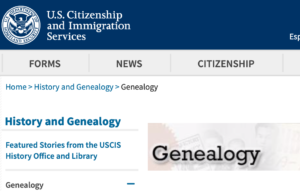 I follow genealogist Jennifer Mendelsohn on Twitter and through her learned that the United States Citizenship and Immigration Service (USCIS, which used to be called the Immigration and Naturalization Service) is proposing a substantial rate hike for genealogical records.

You can read all the details at Records Not Revenue, but the Reader’s Digest version is that, under the proposal, digitized genealogy records will cost $240 and paper copies will cost $625. The current rate for those same documents is $65. Prior to 2016, the rate was $20 to $35. Obviously, this rate hike would have a big effect on many genealogists’ ability to access these records, which include naturalization files, alien forms, visa files and registry files.

Records Not Revenue, an effort of “coordinated by an ad hoc group of genealogists, historians and records access advocates,” points out that this rate hike is relevant to all genealogists, not just those with immigrant ancestors whose records might be available through the USCIS. The website states, “If USCIS finalizes a rule to make these records much more difficult to access via significant fee hikes, who’s to say other governmental agencies won’t follow suit? Attempts to make one record set less accessible should make any researcher in any field nervous.”

I’m bringing it up now not to worry people but rather because there’s something those of us who are worried can do. Records Not Revenue urges us to read the proposed rule, and submit comments to the Federal Rulemaking Portal, copying our Senators and Representatives, before 16 December 2019. The provide all the links necessary, along with suggested conversation starters. They’ve made it as easy as possible.

To learn more, check out Records Not Revenue, as well as this article on Medium by Jennifer Mendolsohn. That article gives real-life examples of how these records can help people with their genealogy.