A year ago I created a quarterly research scheme for 2014 that actually worked quite well for me. (I described and evaluated it in this post.) I decided that I would divide the year into quarters and focus on one line of my family (that is, the ancestors of one grandparent) per quarter. At that time I outlined all the things that I would endeavor to do in that quarter. The list was lengthy and I think I knew at the time I was writing it that I’d never get it all done.

I’ve learned that when I create unrealistic goals I tend to ignore them. So I decided that for 2015 I need to structure my genealogy goals in such a way that I set myself up for success.

I created a list not dissimilar to last year’s, but instead of expecting myself to do everything on the list, I am striving to do four of the eight things on the list for each family line.  I’m sticking with the quarterly plan, but I’ll be jumping for joy if I accomplish four of the things per quarter. And I imagine the four things I do accomplish will vary by the family line.

Most of the items on my list are things within my control, which I think is important because so much of genealogy research feels outside my control. For example, one of the goals is to spend an average of two hours a week researching. The goal isn’t to solve a particular mystery or achieve a milestone, which I may or may not be able to do, but rather to put in the effort. (I did include one milestone among the goals, because it will feel so good to achieve it.)

The menu of eight items vary in level of effort, so if I have a quarter where I’m not able to spend as much time as I’d like researching, I can probably still get a few Xs. (For example, I’m sure I can find photos on my hard drive and add them to Reunion or add ten pins to my genealogy map.)

So here’s the little table I made in Pages on my Mac. 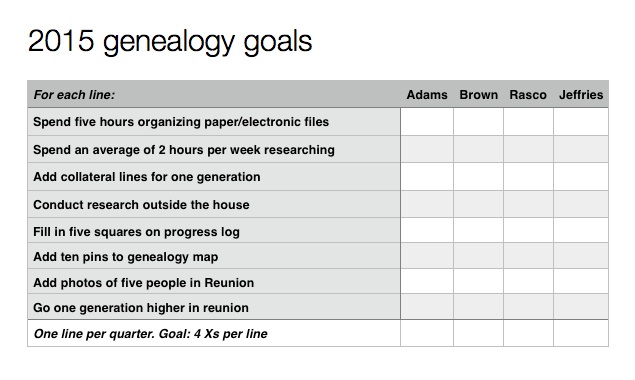 I’m sure there’s plenty of room for improvement here, but I’m feeling good that these goals are achievable and something that I can keep top of mind. I’m going to print out the table and pin it to my bulletin board so I know I won’t forget them this year!