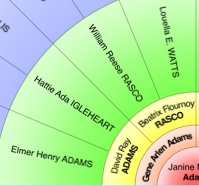 I didn’t plan it this way, but my research schedule has dovetailed nicely with events. In the second quarter, when I was researching the Browns, who lived in Missouri and Nebraska, I paid a visit to the Midwest Genealogy Center and also attended the Brown family reunion in western Missouri. Last quarter, when I was researching the Rascos, I took my cemetery research trip and did some library research in the Alabama stomping grounds of the Rascos. I even met a woman at the library who had grown up next to the Rasco homestead!

So in the third quarter I focused what little research time I had on the Rascos (along with members of the Adams family who are buried in cemeteries I visited on the September trip). I’m still processing the information I gathered on that trip, so research on the Rascos will extend into the fourth quarter.

Now that the year is three-quarters over (how did that happen?) I can reflect on the pros and cons of the quarterly scheme:

I had originally hoped to include organizing my records on a given family in the quarter’s endeavors and I was good about that in the first quarter. I have to admit those efforts have fallen by the wayside in recent months when my organizing business has has been so busy (giving me less genealogy time). I hope to give the quarterly scheme another try in 2015; I think the pros outweigh the cons!