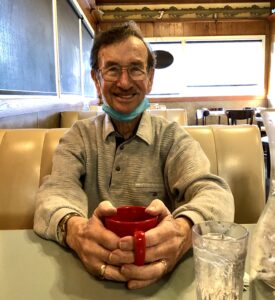 I am so happy to be posting again! I left St. Louis on September 6 to drive to 2,000 miles to Walla Walla, Washington, to help my father celebrate his 90th birthday. (He was born 11 Sep 1930.) I drove because I didn’t want to risk transmitting the coronavirus to him and I felt more in control of who I interacted with driving than flying. On the way, my MacBook Pro went belly up and I ended up having to send it in to Apple for repair. I wasn’t up to trying to blog from my phone, so that’s why I haven’t blogged for a couple of weeks.

In any case, my computer has been returned good as new (it had a swollen battery that had to replaced) and I’m delighted to be back to blogging.

I had a lovely visit with my father, whom I hadn’t seen since February, and I’m so glad I made the trip. I took four days/three nights in each direction and I drove alone. It was amazing to see this part of the country. I spent the night in two states, South Dakota and Montana, that I’d never been to before. That brings my total number of states visited to 48! I listened to lots of podcasts and I even managed to do a little cemetery research on the way home. (More on that in a future post.)

What I wanted to write about today is the birthday gift I gave my father. At 90, he doesn’t need stuff. Because of COVID, we couldn’t have a birthday party. So, at the suggestion of a friend, I reached out to dozens of people from various parts of his life, asking each of them to send me a 30- to 60-second video wishing him a happy birthday and marking the occasion any other way they wanted to.

I used Trello to track my invitations and responses, which made it really easy. It was such a joy to communicate with these folks and receive their wonderful videos. I ended up with forty videos. I purchased an iPad for him so he can watch the videos when he wants. (He’s a Luddite with no computer and no internet access and no desire for either.)

I put the individual videos on the iPad and also used iMovie on my Mac to string them all together into one video, which I put on the iPad. That turned out to be the way he likes to watch it most. Finally, I bought a lightning-to-HDMI adapter so that he can watch the video on his TV. I did everything manually and found it quite easy, but since then, I have found out about a service that will send out the invitations and the compile the videos for you for a small fee. It’s called VidHug.

He was blown away. Because he’s a Luddite I think he thinks it was a lot harder for me to do than it actually was, though I tried to set him straight. The hardest part was finishing the project without a computer! He really enjoyed hearing from so many loved ones. The video was just plain heartwarming.

This is the best gift I’ve ever given (I’m not great at gift giving) and my father appreciated it so much. I mention it here in case you have an elderly relative (or, really, anyone) you’d like to honor this way.  It seems particularly helpful these days when travel and in-person gatherings are so difficult.