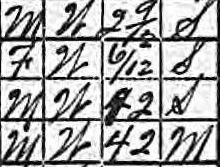 For about a year, I’d been trying to find my great grandfather’s half-brother, Wayne Horace Adams (1907-1976), on the 1920 census. His parents had divorced and I could not find Horace or his father, my 2nd great grandfather George Washington Adams, on that census. I knew that 74-year-old George had received custody of 12-year-old Horace in the 1919 divorce. And I knew that George would enter the Home for Disabled Soldiers in 1922. My curiosity about what happened to this teenager was strong.

I searched for him hither and yon, using everything I knew about him in my search terms. I thought I had searched for him with all his half siblings but in September I found him living in Oklahoma with his half brother John Quincy Adams, whom I apparently had missed checking on. That was an exciting find! (Because I was in a library when I found it, my cheers had to be silent, but that didn’t make them less exuberant.)

I realized that if I had left out his year of birth in my searches, I would have found him more easily. Lesson learned!