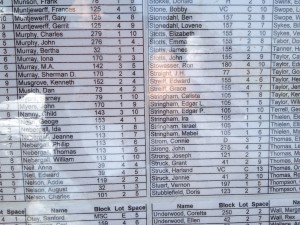 The Nebergalls on the cemetery index

As I mentioned in last Thursday’s post, I took a little detour on my way from Walla Walla, Wash., where I was visiting my parents, back to Portland, Ore., where I would get my flight home to St. Louis. My husband, Barry, and I went to La Grande, Ore., to visit the Grandview Cemetery.

I’d read on a US GenNet cemetery index that my great great great grandfather, Thomas Washington Nebergall, was buried at the Grandview Cemetery, in Block 113, Lot 1, Space 5. His next of kin was listed as his wife, Miriam Van Bibber Nebergall, which matched my records. So I figured that was my guy and that a visit to the cemetery might provide me with some verified information about him (of which I have precious little).

We drove the winding roads through the Blue Mountains to La Grande (part of the time we were actually on the Oregon Trail) and managed to find the small cemetery. We found Thomas’s name in an index (pictured), in a big display case with a map. But when we went to Block 113, there was a lot of open grass and only one Nebergall grave stone, despite there being five Nebergalls on the index in that block.

We searched in vain in the hot sun for more Nebergalls and before giving up I telephoned the cemetery office. The gentleman there gave me the only explanation I’d been able to think of, which is that no grave stones were ever made for them. My hopes for finding more info about my grandfather’s great grandfather at the cemetery were dashed.

I was disappointed, but, as Barry reminded me, it’s just all part of the adventure. The search in and of itself is fun (though it’s made more sweet by some great discoveries). I’m confident that eventually I’ll get the information I seek. And I’m not letting it discourage me from looking at more cemeteries! I have many ancestors buried in the state of Missouri, so I expect some road trips before too long.

I’m just wrapping up my visit with my parents and I’m kicking myself for not having conversations with them sooner about family history and lore. (I wish I had done it when I first started dabbling in genealogy history some ten years ago.)

Either my family just doesn’t talk about this stuff a lot (we didn’t when I was a kid, I don’t think), or my octogenarian parents just don’t remember much. In any case, my fact-finding mission didn’t reveal a lot of facts. However, I did go through a box of old photos my mother had inherited from her mother. Only a few had any kind of labels on them (and my mom didn’t recognize most of those pictured), but there were some obituaries and other potentially valuable documents among the photos, which gave me a little thrill.

My aunt lent me a family history that had been published decades ago and I look forward to going through it and trying to verify the information contained in it. While it doesn’t seem to list sources, it will provide valuable clues.

Today, as we drive from Walla Walla, Wash. (where my parents live) to Portland, Ore., we’re going make a detour through LaGrande, Ore, where my great great great grandfather is purported to be buried. I’ll report on that next week.

My big takeaway for you is that even if your interest in family history is only slight, seek out your older relatives and ask them to tell you family stories. And take a few notes. If you end up doing genealogy history, those conversations might provide you with some valuable clues or explanations for what you find in your research.

Last month I went to the Missouri History Museum to see the special exhibit, The Civil War in Missouri. I have to say, the exhibit stressed and depressed me. What a horrible war, particularly in Missouri, which was recognized by both the Union and Confederacy.

Thanks to my family history research, I believed I had people living in Missouri at that time. But I didn’t have that info at my fingertips, so I wasn’t sure who they were and where they lived. (That’s one reason I subsequently downloaded the Reunion app. I blogged about the Reunion app on my organizing business’s website.)

I learned in the exhibit about General Order No. 11, in which all residents of the better part of four western Missouri counties–no matter what their loyalty was–were ordered to vacate their homes and the counties.  I looked at the map at the exhibit and saw some counties whose names were familiar from my genealogy research. The horror of what these folks endured–being ordered, by name, to vacate their homes and told they couldn’t return to the county (or other specified counties) and then having their homes and communities destroyed by government-ordered fire–is bad enough. When I contemplated that my ancestors might have been among them, it made it even worse for me.

A week or so later, I was researching my great-great grandfather, John Jeffries, who was born in 1850. I found him on the 1860 census, living in Putnam County, Missouri. He was living in Bates County, Missouri in the 1870 census. (In both censuses, he was living with his parents.) I knew that Bates was one of the counties people were forced to leave.

I decided to try to look into the Civil War experience of people in Putnam County and started by locating it on a map. My heart was in my throat as I zoomed out to try to ascertain where within the state the county is located.

And I was flooded with relief to see that it’s in the north-central portion of the state, bordering Iowa. I think that means they would not have endured martial law. Of course, I still have plenty of social history research to do to verify that. And they probably endured another kind of misery there.

As I went through those emotions, I was really struck by how personal family-history research is and how it makes history feel very real. When you have a connection to an individual who lived through an historical event, it makes that event more vivid, more urgent.

Another interesting reflection is how having ancestors living in Missouri during the Civil War, which had both Confederate and Union sympathizers, made the war a little less cut-and-dried for me. I grew up in the state of Washington and so am a true northerner. I was taught that the Union was the side of the righteous and the Confederacy quite the opposite. The fact that my ancestors may have been terrorized by martial law imposed by the Union doesn’t make it any less horrible to me. Boy, there’s a lot of grey area there.