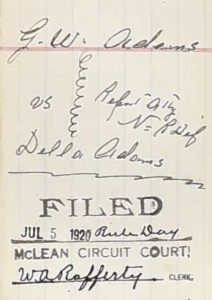 Like many people, I rely primarily on documents I find by searching the internet. When do I library or cemetery research trip, I find information not available online, but when I’m in my office, I search online and if I don’t find what I’m looking for I typically move on.

I know it’s possible to contact courthouses or state archives for documents but over the years I’ve done little of that. In the last couple of weeks, however, I hit the jackpot when I took that extra step.

I’ve been working on transcribing the Civil War pension file of George Washington Adams, my 2nd great grandfather. In it was a divorce decree for his 1920 divorce from his second wife, Della. (I’m descended from his first wife, Henrietta.) That piqued my curiosity because it gave George custody of their “infant son” and the only son I knew about was 12 at the time of the divorce. I wondered if there was another son and also why the 75-year-old father was given custody over the 50-year-old mother. The decree referred to pleadings and depositions in the case and I wanted to get my hands on those. It was Christmas, so I couldn’t pick up the phone (and I don’t like picking up the phone), so I wrote a letter to the Circuit Court Clerk of McLean county, Kentucky.

To my delight, just a few days letter, she got back to me telling me that the documents I sought were in the State Archives and giving me a little extra information to make easier for the archivist to find them. She also gave me a phone number for the Archives. So I called and talked to a lovely young man and gave him a credit card number. That very same day he emailed me photos of the entire file. I think it cost me $8. If I’d wanted, he would have mailed a certified copy but I didn’t want to wait that long. (And get this: He added another divorce petition that I didn’t even know about! Six years into their 14-year marriage, Della filed for divorce from George, but she must have dropped it.)

The 30-page divorce file he sent had numerous depositions and probably sparked as many questions as it answered, but it’s another treasure trove. Turns out there was only one son from this marriage, Horace, who was indeed 12 at the time of the divorce. I don’t know why he was called an infant in the decree. But George went into the Old Soldier’s Home just two years later, so now I need to find out what happened to teenage Horace!

I encourage you to look beyond those documents available online, even if you’re not in a position to travel. There’s a whole world of documents that haven’t yet been digitized!