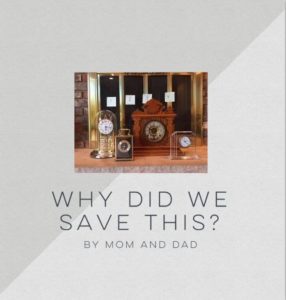 A reader of this blog, Jacqueline Krieps Schattner, sent me a link to a post she wrote recently on her genealogy blog, Seeds to Tree, that described the decluttering she’s been doing during the pandemic (she’s used her time very well!). The blog post also presented an idea that I think is absolutely genius, so I asked her permission to write about it here (and also on the Peace of Mind Organizing blog).

Jacquie’s decluttering work during the pandemic has been very thorough. She got so much done that she turned her attention to an area that’s usually last on the list: the family treasures around her home. In her post, Pandemic De-Cluttering and a Heirloom Book, Jacquie described taking stock of some of the treasures she has collected over 40 years of marriage (and inherited from her parents and grandparents). She’s still enjoying them and has no interest in letting them go. But when she started thinking about what will happen to these heirlooms if she and her husband were to downsize or were not around to explain the significance of each piece, she came up with an important piece of wisdom:

Heirlooms without stories are just stuff.

Jacquie came up with a great idea for making sure her daughters would know the stories of the individual items. She created a book with photos of each of the heirlooms, complete with captions that capture all the stories. That way, when the time comes, her daughters will be able to make informed decisions about which of these heirlooms they would like to keep. She titled the book, Why Did We Save This?

Jacquie spells out in detail how she went about creating the book (via Shutterfly), what it looks like, and what she’s done with the copies. This is such a helpful idea that I’m thrilled to share it! Thanks for allowing me to write about it, Jacquie!