I was so excited to learn last Thursday that one of my speaking proposals for RootsTech 2020 was accepted! My talk is called “The Imperfect Genealogist” and it’s about not letting perfectionism get in the way of your genealogy research. I’ll talk about the areas of genealogy where good enough really is good enough and discuss some techniques for getting past perfectionistic tendencies.

The topic, of course, ties in with the podcast I co-host, Getting to Good Enough and I’m thrilled that I’ll have a few months to work on it. RootsTech 2020 will be held February 26-29, 2020 in Salt Lake City. Please let me know if you’re planning to attend!

I spoke at RootsTech 2017, on going paperless in your genealogy. But that time I had a fabulous co-presenter, Brooks Duncan of DocumentSnap. (Together, we created the Paperless Genealogy Guide.) Doing this solo is a thousand times more terrifying. But I think I’m up for the challenge.

I hope to see some readers there! Registration will open September 18 and I’ll be sure to remind you when it’s open!

RootsTech 2019 started yesterday. I’m not there and in fact I don’t have much time at computer to participate live, but tomorrow I plan to spend some time at my computer watching live (and perhaps recorded) sessions.

If you’d like to watch from home (or your mobile device), you can find the Livestream schedule here and see which sessions are being streamed.

If you want to just turn it on and have it running in the background, here is the YouTube links to Friday’s program (8 am to 7 pm Mountain time). Saturday’s live stream is from 8 am to 4 pm Mountain.

Here’s some good news: If you weren’t able to watch the live stream on Wednesday or Thursday, you can watch the recordings!  Here are the links for Wednesday and Thursday.

In addition to the live stream, if you’re on Twitter, follow the hashtag #rootstech or #notatrootstech to read about people’s experiences and get hints for things to pay attention to. I’m enjoying seeing photos from some of the Expo booths, though it does make me sad I’m not there! Perhaps next year.

RootsTech 2019–the giant genealogy conference in Salt Lake City sponsored by Family Search–is just around the corner, February 27 to March 2. Alas, I’m not attending this year. I’ve decided to spend those dollars on a research trip instead.

I’ve attended four RootsTech conferences (2014, 2015, 2017 and 2018) and even spoke at the 2017 conference. I really enjoy RootsTech because of the great keynote speeches and classes and the opportunity to learn about new services and products in the Expo. I also like meeting up with blog readers and doing research at the Family History Library while I’m in Salt Lake.

So, yes, I really like RootsTech, but I admit that it is exhausting. Last year there were some 17,000 attendees and there were some really long lines. I’m not much for crowds, so I have to be sure and schedule down time during the conference.

The folks who organize RootsTech have created a Survival Guide to RootsTech 2019. If you’re going, I encourage you to check it out. Here are a few things you can do now to make the conference easier once you’re there:

I’m sure I’ll have serious FOMO (Fear of Missing Out) this year as I look at social media during the conference, but some of the conference will be available to those of us who aren’t there.

If you’re going, I hope you have an amazing time. It sounds like the organizers are working hard to make the conference less overwhelming and less exhausting, which is fantastic.

I’m sorry I won’t get a chance to meet any readers of this blog at RootsTech, but I will be attending the NGS conference May 8 to 11 in St. Charles, Missouri. So perhaps we can meet there!

I had a great time at RootsTech and returned home to a lot of catching up to do (as well as client appointments for my organizing business), so I thought today I’d share some photos of my RootsTech experience, rather than writing a long post. I promise at least one substantive blog post on the content of some of the sessions I attended.

Being at a conference with tens of thousands of other people isn’t exactly my cup of tea. But the educational offerings make it worth it for me.

I created a collage of some representative photos. Explanations will appear below the collage. 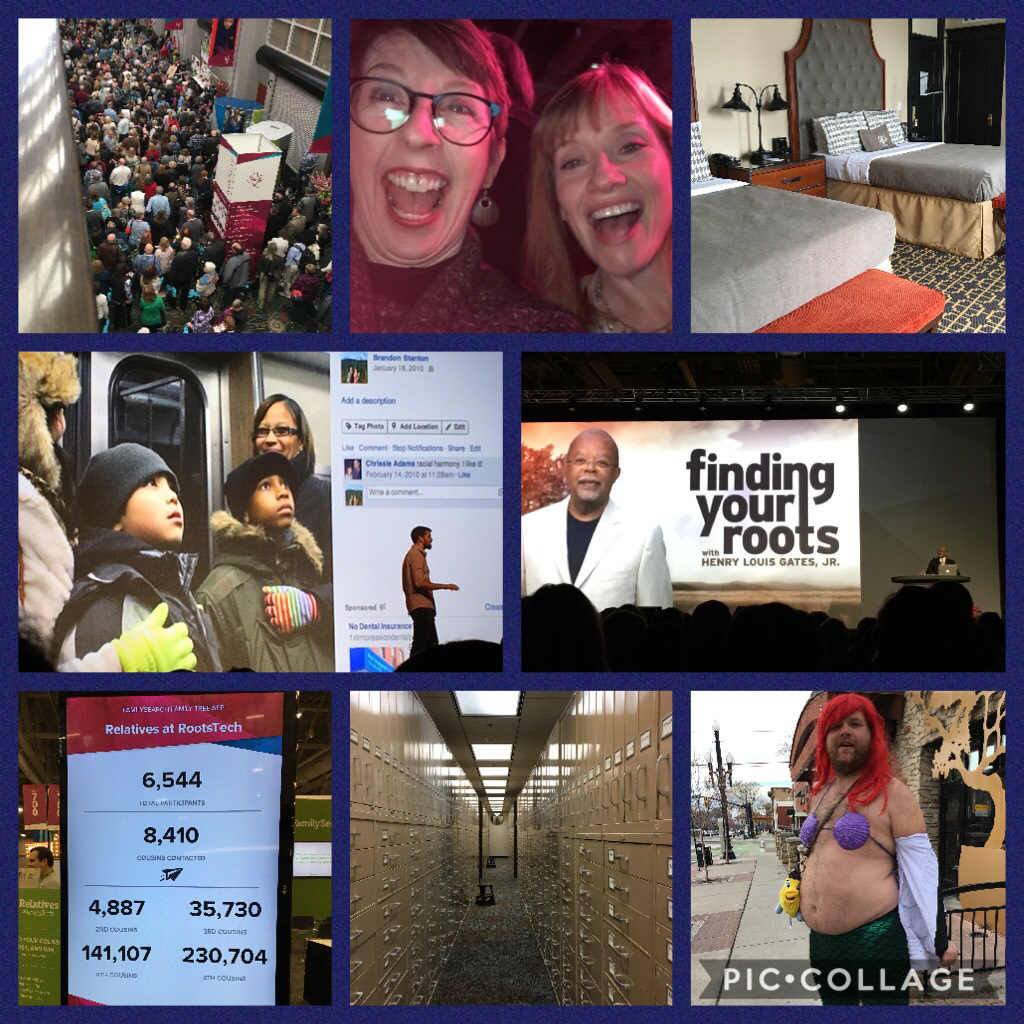 Here are some of the highlights:

My dear friend, Shannon Wilkinson, who has been getting into genealogy research over the last couple of years, joined me at RootsTech, which made the whole event even more fun for me. We shared a lovely room at The Peery Hotel, two blocks from the convention center. It was a fraction of the price of the conference hotels! Before the first general session, the awesome emcee, Jason Hewlett, asked us all to snap a selfie with the person next to us and make a funny face, then post it on social media. The top center photo is the selfie Shannon and I made. It’s one of many photos of the two of laughing that we’ve taken over the years.

A genius at Family Search created an app that allowed attendees to see how many cousins they had who were also attending RootsTech, based on the Family Search family tree. With one simple login and a touch of the button, I was able to see that I had 300 cousins (the closest being a sixth cousin) in attendance! The photo on the bottom left shows the stats on that project conference-wide.

All the keynotes were fantastic. On Thursday we heard Brandon Stanton of Humans of New York who had an inspirational message about listening to others and about following your dreams. Shannon snapped the great picture on the  middle left. The large photo he’s standing in front of is the first photo he took of strangers. On Friday, we heard the inspirational words of former Olympic figure skater Scott Hamilton. His positivity is absolutely contagious. (No photo because the person sitting in front of me had big hair.)

On Saturday, we heard Henry Louis Gates of Harvard University and the TV show Finding Your Roots, who did not disappoint. (That’s him in the center right of the collage.) His eloquence and enthusiasm for genealogy, DNA, and teaching young people about DNA and genealogy (in his Finding Your Roots: The Seedlings program) was motivating and inspiring. Also on Saturday, we also had the opportunity to hear the beautiful Mexican singer Natalia Lafourcade perform. It was a special treat to hear her perform the Oscar-winning song, “Remember Me,” (from the movie Coco) for the first time in front of a live audience. The next night she performed it (albeit in a different way) on the Oscar broadcast! Note: All the keynote talks, as well as some major sessions, were recorded and are available to watch at this link.

I am so happy I was able to take advantage of the conference being in Salt Lake City to spend a few hours looking at microfilm at the Family History Library. The bottom center photo in the collage is just one of the many aisles of microfilm storage. Amazing!

The aforementioned crowds definitely took the luster off the event for me. I snapped the photo on the top left from above as people streamed toward lunch after a session. This year, our name tags were scanned before we could enter a session. That led to long, tedious lines and difficulties passing through hallways. I hope they reconsider that. Many people had difficulty getting into talks–they stood in line for more than an hour in some cases, only to be turned away. I didn’t experience that, but I wasn’t trying to attend the popular DNA sessions. I also had no problems registering (I literally had a wait of about 30 seconds) while others waited in line up to three hours.

On my way out of a restaurant the day I was leaving, I encountered this gentleman who explained me that he was part of an Urban Chariot Race team called Disney Princesses. I asked him if I could take a picture of him (I couldn’t resist!) and he struck a pose. There he is on the bottom right of the collage.

Seriously, if you have a chance to attend RootsTech next year and you’re not completely opposed to crowds, I heartily recommend it!