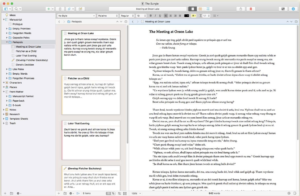 I am participating in National Novel Writing Month (NaNoWriMo) next month, in which I (along with about a half million other people) will be attempting to write a 50,000-word novel in 30 days. Call me crazy, but that’s my idea of a fun challenge. (I do it every five years, and this is my fourth novel. I blogged about it yesterday on my organizing blog.)

Last week, I decided to download a free trial of Scrivener, software designed for people who are writing long documents. I’ve heard about Scrivener over the years but was never really tempted to try it until this year when I took a look at this introductory video and realized how helpful it would be for me in writing my novel. So for the last couple of days I’ve been taking tutorials in preparation for using it to write my novel in November.

Another thing I’ve been working on the last couple of days is transcribing a long, delightful newspaper feature that was written about my paternal grandparents in 1979. They were the founders of a small-town weekly newspaper, the Franklin County Graphic in Connell, Washington, whose first issue was published in 1954. (My grandfather, a life-long newspaperman, was 50 when he and my grandmother decided to take on this adventure!) They sold the paper in 1975 and on the 25th anniversary of the founding, the newspaper published a long, two-part feature on them.

My aunt had given me a clipping of the second part of the feature when I saw her a couple of weeks ago and I emailed the newspaper to see if they would send me the first part. They cheerfully complied, but the resolution of the image they sent is not the greatest.

So I decided to transcribe the article so that my dad could read it. (He doesn’t have a computer.) I started yesterday by opening the article in Preview (my Mac’s pdf reader) and toggling back and forth between it and Pages (my Mac’s work processing program). I’m pretty good at it (it’s how I transcribed my 2nd great grandfather’s 138-document Civil War pension file), but it’s a little clunky and time consuming.

This morning, it dawned on me that I could use Scrivener for transcribing genealogy documents to make the process a whole lot easier. In Scrivener, you can store images in a research folder and you can split your screen and see two things at once. So I split the screen vertically and put the article I’m transcribing on the left and the text document of the transcription on the right. Since I’m transcribing a newspaper article published in single columns, this view is excellent. (You can also split the screen horizontally.) Now, instead of switching back and forth from Preview to Pages, I just keep my eyes on the article I’m transcribing and touch type. It’s so much easier and faster!

I can export the document as a Rich Text Format file or as a Word document, so I’m not tied to Scrivener for reading the transcription.

Since Scrivener is brand new to me, I had to figure out how to do this. It wasn’t not hard, but it was also not completely intuitive for me yet. I was going to try to post step-by-step instructions here, but I realized that if you need help you’re better off getting help from the Scrivener site or from another site written by someone who’s actually knowledgeable about the program. But I found it to be easy to do, even as a novice.

When I downloaded Scrivener, I wasn’t thinking about genealogy at all. But now I’m getting kind of excited thinking of the genealogy applications this split screen might offer. It will probably be enough to justify purchasing the license after the free trial expires! Scrivener has come up in the comments on this blog a few times (including today, when Teresa mentioned she belongs to a Scrivener users Facebook group) and I’m glad I finally paid attention.

If you use Scrivener, I’m curious about if you use it for genealogy purposes. Please let me know in the comments!

Edited to add: The day after I wrote this, I finished transcribing the long article and doing it in Scrivener made it so much easier and more enjoyable! I think it cut the amount of time in half that it took to transcribe. Two thumbs up!