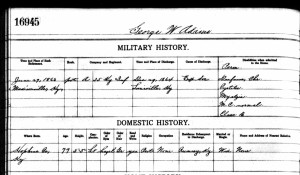 So I’m sending another check and they’re sending me another death certificate. I’m considerably cheered by the prospect that I’ll be able (I hope) to verify that this is indeed my George Washington Adams and that I’ll be able to glean some more information about him from it. Then I can go to Fold3 and start gathering information on his Civil War service.

The moral of the story: Next time I write for some information that I don’t receive, I’ll pick up the phone and inquire, rather than assuming the information wasn’t available!

One of the reasons I frequently feel overwhelmed with my family history research is that there are so many different lines to explore and people to research. I’ll often jump from one to another in the course of a research session.

But for the last few days, I’ve been focusing on one person, my father’s paternal grandfather’s father, George Washington Adams. I can’t seem to verify his birth date and death dates and his name is common enough that there quite a few red herrings out there. I’ve been trying various online sources and scratching my head over this. I’ve made some assumptions along the way that I realize might not necessarily be right. I think I’ve found his Civil War records and if I’m right on that, then that’s him living in the National Home for Disabled Soldiers on the 1930 census.

Usually when I get frustrated, I move on to another ancestor. But this one has kept gnawing on my brain, like a dog gnawing on a bone. I haven’t been able to move on.

But I think I found him listed on an index of Illinois deaths from the Illinois Death Certificates Database. I have to write to the Vermilion County Clerk to request his death certificate, but the index included the death certificate number, which gives me hope. When it arrives I hope that it will confirm that this is my guy. We shall see.

Now I just have to wait for the death certificate. (I mailed the request this morning.) So I’m going to put George Washington Adams out of my mind and move on to another family member. I think giving my brain a break from this little frustration will do me good!