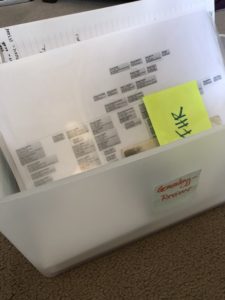 Earlier this week I couldn’t put my hands on a tax document I needed. (It’s nice to know that professional organizers have these problems too, right?) I tore apart my office looking for it (not a pretty sight). And in doing so I discovered a whole bunch of unfiled papers related to genealogy. What? I’m supposed to be all about digital genealogy. Where’d all this paper come from?

I put all the papers together in a container. (That’s a picture of it at the top of this post.) They appear to be categorized in some way. At least I think they are, because they’re in five separate plastic file sleeves, plus a few loose papers.

I also gathered together all my unread genealogy publications. I have a backlog of issues of the National Genealogical Society Quarterly, NGS Magazine and the Missouri State Genealogical Association Journal. I have a bad habit of putting these publications aside when they arrive in the mail. But I know that at the very least reading case studies can be useful, so I’d like to dig into them.

I have no idea what treasures or clues might be hiding among all that paper. So I’ve decided to focus on the paper until it’s gone. Starting today. Here’s my plan:

Does anyone want to join me on dealing with a paper backlog in February? 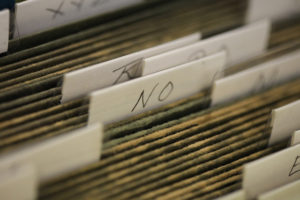 I just re-read a blog post I wrote on August 12, 2012, just a couple of months after I started this blog, called How I organize my family history research. It outlines how I organized my research back in the day, when I kept everything on paper. If you have all your genealogy documents on paper, you might find it helpful.

What struck me in reading this six years later is that, with the exception of using Reunion software, I no longer do anything I outlined in that article. Wow!

Specifically, I don’t print documents. Therefore I don’t file documents. And I almost never access the documents I printed and filed six years ago. If I wanted to see them and didn’t already have them filed on my hard drive, I would just go online and download them. The exceptions are the few documents I have that were mailed to me. And I scan those whenever I come across them.

Am I better at organizing my genealogy research now than I was in 2012? Not necessarily. I’m a professional organizer and I did a great job of organizing my papers back then. But is my current system better than my 2012 system? For me, the answer is unequivocally yes.

If you’re curious about my evolution of paper to digital, check out these posts:

It’s so fun having a blog so that I can look back and see how things have changed over the years. This transition from paper to digital has undoubtedly been a positive change for me! 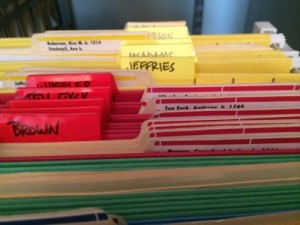 If you’ve read this blog from its start six years ago, you know that I used to be a paper person with my genealogy research. Storing documents on my hard drive made me nervous before I had a solid folder structure and file-naming system in place. So I put together a couples-based folder system that worked for me.

It turns out there were some documents that I couldn’t easily file by couple and I put them into a separate file. Then I committed the cardinal sin of paper management: I didn’t label that file.

For years now, I’ve been paperless with my genealogy. I can’t remember the last time I printed something I would have to file.

Yesterday, though, I remembered a family history written in the 80s by a cousin of my grandfather.  I wanted to look at but it wasn’t on my hard drive, so I dug into my paper files looking for it. It wasn’t where I expected to find it, so I kept looking. And that’s when I found the unlabeled file of miscellaneous papers.

Happily, the family history was there and it’s now scanned and filed on my hard drive, with the paper version filed where I would expect to find it. (I suppose I could part with all that paper, but it’s not doing anybody any harm, so I haven’t pulled the trigger on that.)

Also in that mystery file, I found a packet of papers about my Adams line that had a sticky note on it that said, in my handwriting, “Return to Aunt Gwen.” Yikes. Aunt Gwen is my father’s sister. I haven’t even looked at it yet, but I brought it to my desk to process and scan. Then I’ll return the papers to my aunt.

How about you? Do you paper files of genealogy research that you no longer use? It might be worthwhile to dive in there and see if there are any fun documents (filed or otherwise) that you’ve forgotten about! 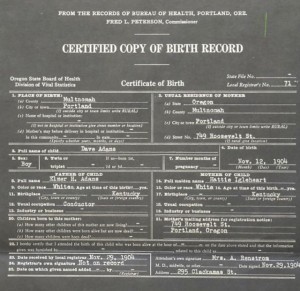 In an extreme example of the perils of letting household filing pile up, I found my grandfather’s birth record over the weekend.

Over the last few years, I’d put some effort into figuring where he was born. It was mysterious to me because the census records said he was born in Oregon, yet his residence was always Washington. My father, his son, had no recollection of any family history in Oregon. Two years ago, I blogged about it when I discovered a birth announcement in a Portland paper. At that time I said I had written away to the state archives for a copy of the birth certificate. Alas, I received a letter from the Oregon Health Authority saying that no birth record was found.

Fast forward to October 2015. I decided to stop ignoring a pile of household filing that had been sitting on top of the file cabinet for a long time. They were mostly paid bills, some records of home repairs, things like that. I file pretty consistently, I had just let this pile happen slowly over time when I had items that would take a little extra effort to file. I’d gone without touching it for some time. It had become part of the landscape.

I set my timer for ten minutes and filed. Some of the items had aged out, so I could just throw them away. It took four or five ten-minute sessions over a couple of days before I reached the bottom and, to my embarrassment (I’m a professional organizer!), I realized that the items at the bottom of the pile were set there in 2007.

Among them was a file marked with my parents’ address. In it were some documents I had snagged when cleaning out their file cabinet in 2007. I remember that epic file-cabinet clearing. My parents had saved decades’ worth of certain paid bills. There were home purchase documents and some fun records, like the hospital bill for my birth in 1962 ($261.30), which was also in the file in my filing pile. But the real gem was a certified copy of my grandfather’s birth record, issued in 1944. Apparently there was never an actual birth certificate, since this copy was based on “affidavit and documentary evidence.”

In 2007, when I saved that document from being shredded with the rest of my parents’ old records, I was interested in genealogy. But wasn’t working on it properly or seriously. I knew enough to save that birth record, but I wasn’t interested enough to file it away properly or even remember ever having seen it.

Needless to say, I was delighted, if a little chagrined, to find it. I’ve added it to the source list in my family tree software. I’ve scanned it and filed it electronically and filed the copy among my paper files. It’s now safe and sound where it belongs.

Are there any piles or files in your home that might reveal some genealogical treasures? It might be worthwhile to catch up on your filing!