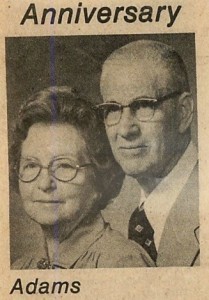 As I said I would, I waited until I was on the airplane to open the letter from my grandfather, Dave Adams, to his sweetheart, Beatrix Rasco, my grandmother, which my aunt had given me. (That’s the picture from their 50th wedding anniversary announcement at left.) While the letter is 36 pages long, my grandfather’s handwriting was large, and he left ample white space, so it took me no time at all to read it. (There were also several pages missing!)

My grandfather opens the letter by explaining that it is a confession of sorts. He wrote:

“…[B]ecause I have absolute faith in your love, and believe that you will try to understand me, and most of all, because I’m going to clear the path to our marriage at Christmas–or block it–I’m going to write the whole thing. If I could see you–and boy how I wanted to–I could explain the whole matter with a fine chance of getting across, for in my mind there is no guilt….I want to resassure you before I start that no girl is implicated. I fooled you, didn’t I, honey? But as far as I’m concerned, it’s much worse.”

You can imagine that I was chomping at the bit to find out what he was going to confess! But there weren’t any major revelations. (That would have been too easy, right?) Instead I got little clues about how grandfather lived as a child and young man, and some more insights into his parents’ estrangement. I learned that there wasn’t a big blow up or event that led to their separation. Rather, due to economic necessity, my great grandfather, Elmer Adams, lived where he worked and my great grandmother, Hattie, stayed in a more populated area (Olympia) and rented rooms in their house to earn income. Eventually, they decided to make the arrangement permanent and my grandfather was informed by his sister, and then his mother, that the couple would never again share a home.

It led me to think about how our social norms have changed over the last 85 years. Things we wouldn’t bat an eyelash at now (having parents who were separated, for instance) were a potential reason not to marry someone, apparently. My grandfather wrote in his letter that he asked his sister, Dora, if he should “let the fact that I have no united home keep me from marrying. Dora said ‘absolutely not.'”  His siblings gave him the courage to confess his family’s checkered history and ask for his sweetheart’s love and hand in marriage.

I did pick up a few facts that I hadn’t known:

I treasure this letter because it’s full of love, humor and honesty. I love that my grandmother read it and married him anyway (just a month later). They were married for 58 years, until Dave died in 1986. I worry that we’ve lost the art of letter writing to the expediency of email and, worse yet (from a permanence point of view) text messages. It makes me wonder if future generations will experience the thrill of this kind of discovery from their 21st-century ancestors! 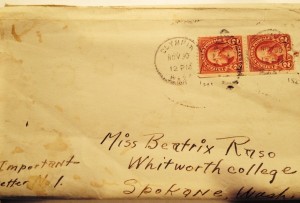 I’m still visiting my family and today, I stopped by to see my aunt (my father’s sister). She delighted me by giving me a photo of she and my father, taken in 1934, when they were 5 and 6 years old. Adorable. I’m very grateful for it.

Then she blew me away by pulling out a 36-page handwritten letter (though at least two pages are missing) from my grandfather to my grandmother, written about a month before they were married in 1927. My grandfather, David Adams, wanted to reveal his life’s story to his sweetheart in hopes that she would still want to marry him.

How tantalizing is that for a genealogy enthusiast? As I’ve written here, I’ve been frustrated in my efforts to know more about my grandparents. I didn’t know why my grandfather’s family moved from Kentucky to Washington in the first decade of the 20th century or why his parents were estranged. I’m hoping to learn the answers (at least from his perspective) in the letter. Maybe I’ll also learn why it is that these estranged parents were buried next to one another.

I’ve not yet read the letter. I have a long flight ahead of me on Saturday and I think I’m going to wait until I have that uninterrupted time to dig into it and see what mysteries are solved and what facts are revealed. I am so grateful to my aunt for sharing it with me and promised to scan it (guess what I’ll be buying!) and return the original to her, though she promised I’ll be able to keep the original one day.

I noticed that on the back of the last sheet, my grandfather wrote, “Destroy the manuscript, will you please?” I am so happy that my grandmother ignored that request!

I wrote a month ago about finding my grandmother on the 1920 census and being surprised that at the age of 13 my grandmother was classified as a farmer. I noted that her brother, Wilson, also a farmer, was 7 and didn’t know how to read or write. I noticed that in the 1930 census, after they’d moved to Washington state, Wilson was in school and could read and write. That seemed like an achievement.

Just now I discovered that Wilson is William Wilson Rasco, aka my father’s Uncle Bill. I remember him when I was a child. He was loads of fun and would howl in pretend pain when my brothers and I would give him “Indian burns” (i.e. rub his wrist in a twisting motion that’s supposed to hurt.) I knew he was a minister, but he never seemed like one to me, because he was so much fun.

As part of my family history research, I came across an obituary for Uncle Bill, in the Seattle Times. He died in 1996 and was a very accomplished and prominent leader in the United Presbyterian Church in Washington, North Idaho and Alaska.

So thanks to the joys of family history research, this person has gone from the name of a seemingly illiterate boy farmer in Texas to an influential minister with a doctorate in divinity. And a man whose infrequent visits delighted me as a little girl.

Incidentally, the obituary contained this nugget:

A 1978 Seattle Times story noted that Rev. Rasco’s fate was sealed at a young age. His mother, wife of a Yakima County orchardist, almost died in childbirth and vowed to commit her son to the ministry.

Since I’m not directly descended from this William Rasco, I haven’t been researching him. But finding his obituary led me to a newspaper story that let me know my great grandmother almost died in child birth and that my great grandfather was an orchardist. Of course, I need to verify this information, but it’s just another tantalizing thing to look into.

One of the things I love about family history research is that even census records can give you a little peek into the lives of people who lived before us. The fact that these people are related to us makes it even more interesting.

For example, I found my paternal grandmother, Beatrix Rasco, on the 1920 census. She was living in Plainview. Texas. with her family, on a farm. She was 13 years old and in school. She could read and write. In my experience, when a student is listed on the census, the occupation field is left blank or the word None is entered. In my grandmother’s case, her occupation was Farmer. Her little brother, Wilson, who at 7 was not in school, could not read or write and his occupation was listed as Farmer. (Their father was a farmer, as was their big sister, Lessie, who was 18 at the time. Their mother had no occupation listed.)

When I was 13 I think I babysat for some money, but my biggest worry, besides boys, was making sure I was able to watch Happy Days on Tuesday evenings. It’s hard for me to imagine life as a teenage girl farmer. Or a little boy who worked a farm but didn’t go to school and couldn’t read. (Though, to be fair, I don’t know at what age most kids started school back then. I’ll have to look into that.)

Kids today would probably consider my childhood deprived, since we had no computers, VCRs, cell phones (smart or otherwise) or, of course, internet. But by comparison to my grandmother’s childhood, it seems like I was living in the lap of luxury.

I can’t wait to have more glimpses of the past via my family history research!