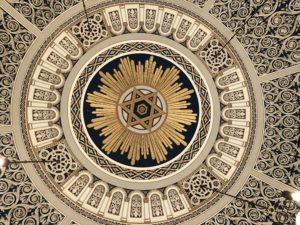 I’ve lived in my house here in St. Louis since 1992. (Four of those years we rented out the house and lived in Brooklyn, New York.) When we moved in, I did a little research about my house, which was built in 1908, at city hall, where I the building permit. And when the 1940 census was released, I did some census research on the house, which I talked about in this 2013 post.

On Saturday, I attended a workshop at the Missouri Historical Society’s library on doing house history research. It was a great experience. The library itself–which I had never visited–is absolutely beautiful. The building was once a synagogue and it has lovely interior with an incredible domed ceiling. (That’s a picture of the interior of the dome at the top of this post.)

Associate Archivist Dennis Northcott took us through all these resources at the workshop. He even went to the trouble to find samples for each resource using the addresses the workshop attendees were researching.

After the workshop I came home and started to work on researching my house. I started by looking at the census research I’d already done. (It was so long ago that I hadn’t saved the images digitally.) I thought about how I wanted to organize the information, particularly since a traditional family tree wouldn’t be applicable.

I decided to use my latest favorite app, Trello, to keep track of the research. I made a House History board, with a list for library lookups and a list for each of the addresses I’m researching. As I spelled out in my previous post about researching my house, mine is one of four two-family houses in a row built by a man for his four daughters. So I’m interested in all four houses plus I’m interested in the houses the daughters lived in prior to and after living in mine. I’m also interested in the other owners and tenants of my home and, to a lesser extent, the occupants of the other three homes of the quartet.

Here’s a picture of my Trello House History board as it stands today: 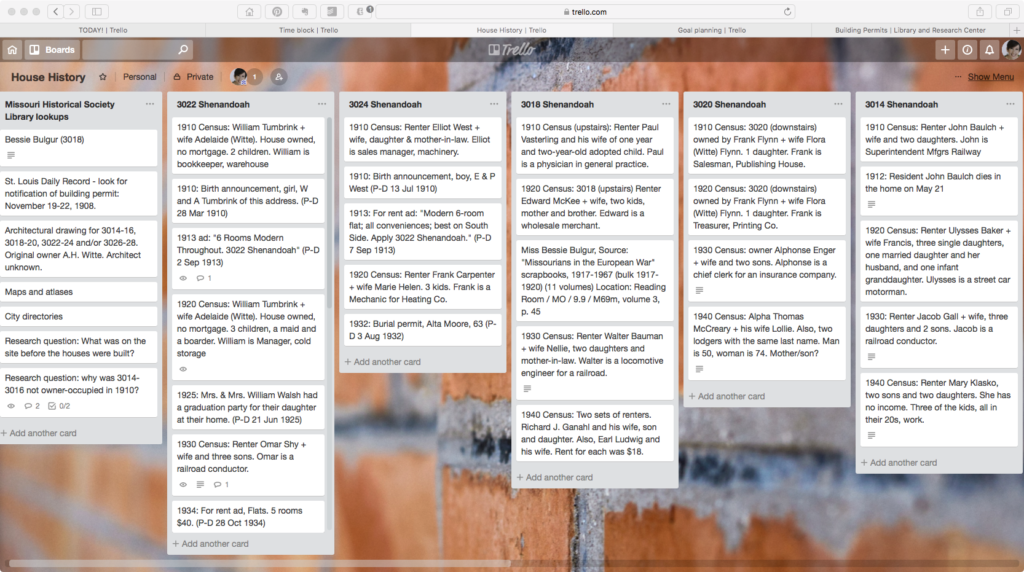 The other thing I did at the outset was to create an Evernote checklist of the resources spelled out on the Missouri Historical Society website.

So far, in addition to census research, I’ve done newspaper research. Next up will probably be city directories as well. Tomorrow, I’m going to go to the Missouri Historical Society Library to do some research with a friend who has an interest in the history of his beautiful old home. I don’t want my house history research to distract me too much from my genealogy research, but it sure is fun! 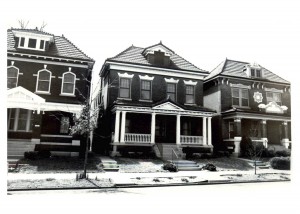 That’s my house in the middle.

When the 1940 census became available, I jumped at the chance to do a little research on my house.

My house was built in 1908. It’s in the city of St. Louis, though the area wasn’t very developed 105 years ago. The house was built as a two-family house and there are four in a row with identical layouts, though with different exterior architectural flourishes. The lore we heard when we bought our house in 1992 was that it was built by a man who lived in the posh neighborhood a block away who had four daughters. He wanted each of them to have a place to live and a source of income. That may explain the beautiful woodwork and stained glass in the houses.

When we first moved in, I went to city hall and found the building permit for the homes, so I verified that they were indeed 1908 houses and that the four houses were built by the same person. I saw the address of that person and committed it to memory– I’ve always felt a kinship with that house, which I pass most days when I walk my dog.

Flora, the youngest, was living in 1910 in the house just to the east of ours. She lived with her husband of two years and their baby. Interestingly enough, they chose to live on the first floor and rent out the upstairs unit.  In the fourth house, both units were rented and Leona, still single, was living with her parents.

Fast forward 10 years and Addie is still living in my house, but now she has a servant. Alma and Flora are living in their respective houses, on either side of her. All have different tenants. Leona, now 39 years old, is married (to a man seven years her junior) and they have a 10-month-old infant. But they’re living with Leona’s parents, not in the house built for her. I wonder why.

In the 1930 and 1940 censuses, Adelaide had moved out of our two-family house and moved on to a single-family house in the suburbs. I haven’t researched what became of Alma, Leona and Flora after 1920.

What strikes me when I look at my house on the earlier censuses is how many people lived in it. Each unit is about 1600 square feet, with two bedrooms–not tiny, but not huge. In 1920, Addie lived in the upstairs unit with her husband, three children, and a maid. Downstairs, the tenant, Frank Carpenter, lived there with his wife and three teenage kids. That’s a total of 11 people in the house. In 2013, my husband and I live in both units of the house and it’s just the two of us (and always has been).

My understanding is that during World War II, my house was turned into a boarding house, with five units. I believe it, because when we moved in, the house to the west of us had six units. (It was converted more than ten years ago to a luxury single-family.) In nine years, when the 1950 census is released, I’ll be able to verify how many people were living in my house when it was a boarding house. Can’t wait!