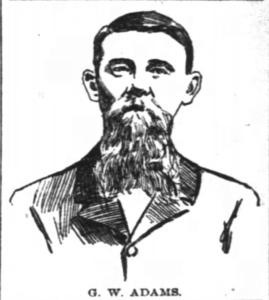 My long-awaited research trip to Kentucky took place last week, June 24-28. I drove 3.5 hours to McLean County on Monday morning, arriving in time to visit the McLean County family history research center, as well as the McLean County Public Library’s genealogy room and three cemeteries. It was a full day!

As I mentioned in a post while on the trip, the bed and breakfast where I stayed was across the street from the funeral home that was called in when Bonnie Adams, the daughter of 2nd great grandfather, George Washington Adams (who was the focus of this trip) died at age six from influenza in 1919. Spending time in the small town of Calhoun (population less than 1,000) where that family lived was very powerful. Visiting the cemeteries where my family members were buried is an experience of deep connection. I also realized how many more names I recognized this time, compared my first visit there in 2014. I know so much more about this branch of my family than I did five years ago!

From McLean County, I traveled on Tuesday morning to Owensboro (just a half hour away), where I spent much of the day in the Kentucky Room at the Daviess County Public Library. My discoveries weren’t huge, but, thanks to the helpful librarians there, I was able to find an 1895 newspaper profile of George Washington Adams (1845-1938) that originally appeared in the Louisville Courier. It gave me information about his political career (something I hadn’t been aware of before June of this year) and, best of all, it included a sketch of him! That’s him at the top of this post. Ryan, one of the helpful librarians in the Kentucky Room, commented on George’s “epic beard.”

After a hearty lunch in Owensboro, I drove 2.5 hours to Frankfort, where I checked in at a very private Airbnb property that is just a block from the Kentucky Historical Society, as well as walking distance to lots of downtown restaurants. Its entrance was in the back of the house, facing the Kentucky River. It was a great little getaway in the heart of town.

I stayed in Frankfort three nights. The three places I was keen on going were the Kentucky Historical Society’s research library, the Kentucky Department of Library and Archives (KDLA) archives research room and the Kentucky Office of Vital Statistics, where I wanted to get my hands on the long form (handwritten) of Bonnie Adams’ 1912 birth certificate. This child’s name on her death certificate is Bonnie and on her grave marker (which I saw this trip) is Bonita. I had sent away for her birth certificate in 2017, but the non-original computer-generated short form I was sent listed her name as Gliolia, the name under which it was indexed. I was curious about the handwriting that would make “Bonnie” look like “Gliolia” so I was happy for the chance to get my hands on the hand-written original version of the birth certificate. Guess what? The handwriting was actually quite clear and it looks all the world like Gliolia. So I don’t know what’s up with her first name. It’s another new mystery to explore. This long form gave more information than the short form I’d been sent–including how many children her mother had had who were still living and her parents’ occupations. Note to self: If I send away for another birth certificate in Kentucky (or perhaps elsewhere), I’ll request the long form.

I had spent as much time as I could prior to the trip trying to identify things to look up in these repositories. I knew that I wanted to look at vertical files, which I did at the first three places I went. At the KDLA I was able to examine the original documents surrounding the 1920 divorce of George Washington Adams and his second wife, Della. I also saw the divorce papers for a 1912 divorce filed by Della against George that was apparently dropped.. Thanks to the great researchers at KDLA, I’d actually been sent these documents in 2017 but the type on one of the pages was very faint. Thankfully, the original was perfectly legible, so I was able to take a photo of the document and, while I was there, I went ahead and transcribed it. (It was just a page and a half.) That made me so happy because I’d been straining to read the document I’d been emailed.

My other achievement was that I was able to prove the parentage of a 3rd great grandfather, Henry Clay McEuen (1823-1894) who was the father of George’s first wife, Henrietta Clay McEuen Adams (1847-1902). Connecting Henry to his parents, Felix McEuen (1794-1872) and Lucretia Mentelle McEuen (1899-1875) allows me to explore some interesting information my aunt had given me in the form of an unsourced family history that provides details about Lucretia’s parents, Augustus Waldemard and Charlotte Victoire Mentelle, who were prominent early-19th century citizens of Lexington with connections to Mary Todd Lincoln and Senator Henry Clay (John Quincy Adams’ Secretary of State). I’d been tantalized by that family history but didn’t want to explore its clues until I’d proven my connection to the family.

This was definitely a successful trip, despite the absence of huge “Eureka!” moments. While I was away, I made a few notes of things I think I did right and things I could have done better.

Things I did right:

Things I could have done better:

Of course, like everything, the trip didn’t go perfectly. But I think it went very well and I’m really satisfied with my planning and what I was able to find. I’d forgotten to take into account the mental exertion of full days of research five days in a row! By Friday afternoon when I left for my five-hour drive back to St. Louis, my brain was full and I was ready to stop.

I’m really grateful for this opportunity. Getting away from daily life and really focusing on my research was a special treat. If you have the opportunity to do it, I heartily encourage it!