What’s interesting to me is that my family has always seemed quite devoid of ethnicity (most of the ancestors, I believe, came to the US much earlier than the 19th century) and when, as a child, I asked my parents where we were from, England was always the answer. In fact, I surprised my mother when I told her about her great, great grandfather having been born in Ireland. That was news to her.

I feel like this is opening up a new chapter in my family history research!

I wrote a month ago about finding my grandmother on the 1920 census and being surprised that at the age of 13 my grandmother was classified as a farmer. I noted that her brother, Wilson, also a farmer, was 7 and didn’t know how to read or write. I noticed that in the 1930 census, after they’d moved to Washington state, Wilson was in school and could read and write. That seemed like an achievement.

Just now I discovered that Wilson is William Wilson Rasco, aka my father’s Uncle Bill. I remember him when I was a child. He was loads of fun and would howl in pretend pain when my brothers and I would give him “Indian burns” (i.e. rub his wrist in a twisting motion that’s supposed to hurt.) I knew he was a minister, but he never seemed like one to me, because he was so much fun.

As part of my family history research, I came across an obituary for Uncle Bill, in the Seattle Times. He died in 1996 and was a very accomplished and prominent leader in the United Presbyterian Church in Washington, North Idaho and Alaska.

So thanks to the joys of family history research, this person has gone from the name of a seemingly illiterate boy farmer in Texas to an influential minister with a doctorate in divinity. And a man whose infrequent visits delighted me as a little girl.

Incidentally, the obituary contained this nugget:

A 1978 Seattle Times story noted that Rev. Rasco’s fate was sealed at a young age. His mother, wife of a Yakima County orchardist, almost died in childbirth and vowed to commit her son to the ministry.

Since I’m not directly descended from this William Rasco, I haven’t been researching him. But finding his obituary led me to a newspaper story that let me know my great grandmother almost died in child birth and that my great grandfather was an orchardist. Of course, I need to verify this information, but it’s just another tantalizing thing to look into. 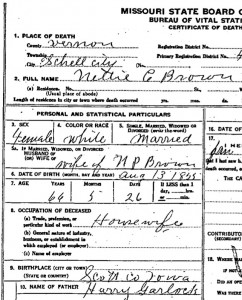 When you’re looking at names on a census record, or a family tree someone else has  compiled, it’s so easy to get fixated on the person’s formal name. But, in fact, even on formal documents, a nickname might be used. And if you’re using an index, that can make finding that person difficult.

Case in point: I was looking for the death certificate of my maternal grandfather’s mother. I understood her name to be Antoinette Brown. (I haven’t thoroughly researched her…I saw her name on her husband’s death certificate and thought I’d see if I can find hers, since Missouri makes it so easy.)

I figured it was a good guess that she died in the same county in which they lived and in which he died and I searched on “Antoinette Brown,” “Antonia Brown” and “A Brown.” I got nothing. So I searched county wide for all deaths of Browns between 1910 and 1961 (the date range for which images of the death certificates are instantly available as PDFs) and then searched within that page for 1922, the year that, according to an unverified public tree on Ancestry.com, she had died. There were two 1922 deaths of Browns in Vernon County and one of them was a “Nettie Brown.” Ah ha! Nettie could be a nickname for Antoinette. So I clicked the image, and sure enough, her husband was listed as N.P. Brown. My great great grandfather was Newton Perry Brown. Furthermore, her parents’ names matched with the unsourced but reliable information my grandfather had received from a cousin, so I’m confident this is her.

Family Tree Magazine has a great list of nicknames for common female names. So if you’re having trouble finding a female ancestor, that link might help you find some nicknames to search for.It’s a terrific resource!