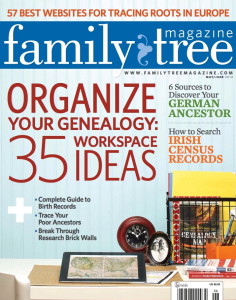 One of the things I enjoy about my work as a professional organizer is seeing how people live and work. Of course, I love helping them improve their organizational systems. But I love quizzing already organized people about how they stay organized. We’re all so different and I find there’s always so much to learn.

That’s why I loved the cover story of  the May/June issue of Family Tree Magazine . The article, called Making It Work, by Denise Levenick, The Family Curator, takes a look at the workspaces of six successful genealogy professionals. Those professional are:

We see photos and learn the inside secrets behind the workspaces–and work systems–of each of these successful genealogists. In addition, Levenick provides lots of organizing tips and suggestions from these pros.  (One of my favorites: “Take a few minutes to file or recycle papers and neaten your desk after each use. You’ll be able to start your next research session with fewer distractions.” ) She also includes a list of online resources. I’m delighted that Organize Your Family History is included in that resource list!

It’s an enjoyable read, full of good advice. A theme among all six subjects was the benefit of eliminating distracting clutter. I know from my experience that putting things away (and having a place to put them) is the key to my productivity at my desk. After reading the article, I was itching to tidy up a bit more!

Incidentally, one way I keep clutter at bay is to subscribe to digital editions of magazine. I receive Family Tree Magazine as a digital subscription. I get an email when it’s available and I download it to read on my computer or iPad. I was able to switch from the print to digital edition mid-year, by simply asking. I love that I don’t have the physical copies of the magazine lying around!

I was so excited to partner with Springpad on the Family History Organizer custom notebook late last year and early this year. I used it for tracking my research and to-dos and when I worked with them to create it, I had no reason to think that I wouldn’t be using it for years to come.

But, alas, on Friday I was notified that Springpad is closing its doors on June 25. I don’t know why, I’m assuming it has everything to do with it being a start up, funded by venture capital. It’s surprising, though, since Springpad is a venerable start-up; it’s been around since 2008, a long time in that world.

In any case, I wanted to announce it here. If you’re using the Family History Organizer notebook, you’ll want to find a substitute. Evernote is probably the most logical choice, since so many resources are available to learn how to use it for genealogy. (I’ve dabbled with Evernote over the years, never fully clicking with its interface, but I’m giving it another try.)

I have dozens of Springpad notebooks, so I was relieved to learn that they are developing an export tool to make it easier to access my data in other apps. That is supposed to be released this week. On June 25, user data will be deleted from Springpad’s servers, so it’s important to export your data by then, or it will be lost.

I really enjoyed working with the folks at Springpad and I wish them all well. I am going to miss Springpad as a resource; it really did help me organize information and it was the first electronic task manager I was ever able to successfully use.

But now I’ll explore other options for task management. (TeuxDeux is the current frontrunner.) And I’ll let you know if I can make Evernote work for my genealogy resources. 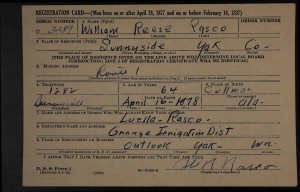 Have you explored your family members’ World War II service? If not, you can take the opportunity to explore Fold3.com’s extensive World War II collection free of charge  through the end of May. That seems like a fitting activity for Memorial Day weekend, doesn’t it?

World War II is recent enough that you may have some family lore you could explore by checking out Fold3’s collection, which includes, among other things:

You won’t be able to find service records, which, according to the Genealogy Insider blog, are available only to veterans and next of kin for privacy reasons.

I personally don’t have a lot of direct-line WWII research to do–neither my grandparents nor my parents served. But I have found interesting information in the form of draft registration. For example, the Old Man’s Draft–the fourth draft registration for that war–included men born between 1877 and 1897, so I was able to find information on my father’s maternal grandfather, William Reese Rasco. That’s the front page of his draft registration card pictured above. As you can see, it provides some great information: date and place of birth, residence in 1942, next of kin info, name and address of employer. The back of the card has a physical description–height, weight, eye and hair color, race, complexion and a box for other obvious physical characteristics.

In 1942, William Reese Rasco was 6′ tall and 195 pounds. He had a ruddy complexion and grey hair. I don’t think I’ve seen a picture of him, so I love that this gives me a bit of a mental image.

If you have some time and inclination, I encourage you to check out this collection (as well as the World War II records on Family Search and Ancestry) in honor of your veteran ancestors. 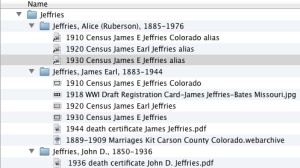 I just realized I’m gradually going paperless when it comes to my genealogy research. It’s been almost a year and a half since I wrote the post To print or not to print?  in January 2013. Back then, I was working hard to resist the temptation to print source documents for my files.

Well you know what? That temptation is completely gone. In fact, I’ve been going in the opposite direction as I slowly work on marrying my paper and electronic files. I’m in the process of making sure that all the documents in my paper files are properly named and filed on my hard drive. Most of these documents were originally found online, so it’s easy for me to find them in electronic form and save them to my hard drive. But if I don’t have an electronic version, it’s easy enough to scan the paper version.

This feels like a really big shift and it happened so gradually that I didn’t even realize it! I think a key component was coming up with an electronic file system that works for me. That gives me confidence that I will find information on my hard drive. (I’m still working on properly filing all the electronic documents that might have been misfiled before I set up that electronic file system.)

How about you? Are you paper or electronic? Or perhaps both?