One of my favorite things about December is goal setting. I take stock of the year and how did on the goals I set the prior December. And then I create new goals for the coming year. I do this for my organizing business every year, but this will be the first year I’ve set specific goals for my family history research.

I think having goals will help me get past the overwhelmed feeling I sometimes get when I think about my family history research. I think I’ll also create a running wish list, a place to capture research subjects or activities I’d like to do at some point. That will help with the “what should I work on today?” question that comes up from time to time.

I’m going to spend some time honing my genealogy goals over the course of the month, so these might change. But right now, the goals that occur to me are:

I’m noticing that none of these goals are related to actual research results or the research that I want to accomplish. And that’s okay with me. I’m a big believer in doing things a little at a time and rewarding effort, rather than results. I don’t know where my research is going to take me and I’m really enjoying the journey. So my goal for next year is continue with the research and enjoy the fruits of my labor.

I’m going next week to visit my parents in Walla Walla, Washington. I’ve kicked myself over the past year for not asking them more questions (or listening better when they volunteered information) about family lore and ancestors when we were all younger. Their memories aren’t as good as they were twenty years ago, naturally.

When I’m there visiting, I plan to ask a few questions that have come up as I’ve been doing genealogy research this year. I don’t know if they’ll be able to answer them, but I have to ask.

And here’s the tiny thing I’m doing that feels kind of radical. I’m actually writing down the questions, even the small curiosities. I’m not relying on my memory. I’m not going to assume that there will be a natural opportunity to ask these questions. I’m writing them in my notebook and at some point I’m going to pull out that notebook and interview my parents. And the notebook will be handy for writing down their responses.

My parents’ memories aren’t the only ones deteriorating with age. My memory is definitely not what it used to be (I’m 50) and I’m not going to take any chances.

If you’re visiting with family members over the holidays, you might jot down some questions to ask them. I so wish I’d done it years ago! 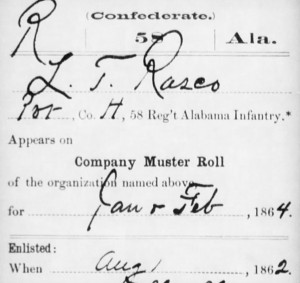 Today I had the good fortune to find the Civil War records for my great-great-grandfather (my paternal grandmother’s paternal grandfather), Laban Taylor Rasco. I initially found him listed in Alabama, Census of Confederate Soldiers, a document I found on Ancestry.com. That listed his company and regiment (he fought for the Confederate Army), which allowed me to easily find a lot of documents at Fold3.com.

He’s not the first Civil War ancestor for whom I’ve found documents, but he is the first on the Confederate side. Through the documents, I learned that he was injured in the Battle of Chickamauga, Georgie in September 1863 and that he was a held as a prisoner of war in a Union prison camp in Talladega, Alabama, and paroled on June 3, 1865, after the war had ended.

Of course, I’m dazzled and amazed that in a matter of a few minutes I can uncover and read these documents via the miracles of scanning and the internet.

But I’m also really amazed by the recordkeeping that took place in this war. When you consider that most forms were filled out by hand and that thousands upon thousands of soldiers fought, it’s remarkable. My great great grandfather was a mere private and today I saw 10 different documents.

I saw the movie Lincoln this weekend (and heartily recommend it) and it brought to life the absence of technology of that era. I am so impressed with the organizational skills that allowed these records to be kept and retained. And, of course, it’s very impressive that they continue to be well organized and accessible.

I think one of the reasons I enjoy genealogy research so much is that it makes me feel like a detective. The mysteries can be frustrating, but solving them is oh so satisfying.

Today’s mystery: the death date of my great, great grandmother, Antoinette Garlock Brown. I thought I had it nailed. She died in Missouri in 1922, so I had easy access to her death certificate. (In fact, I blogged about finding her death certificate in a blog post called Those Darn Nicknames.) The hand-written death certificate lists January 9, 1922 as her date of death. The filing date is listed as January 11, 1922. It didn’t seem ambiguous to me.

Today, I found a photograph of her headstone at Find A Grave. It clearly states her date of death as February 9, 1922. It’s etched in stone, so it feels very official. I also have a yellowed newspaper clipping of her obituary, which was found among my grandmother’s belongings after she passed away. It, too, lists her date of death as February 9. Unfortunately, that clipping doesn’t show the date of the newspaper nor the name of the newspaper.

When I squinted harder at the death certificate, it started to become a little more equivocal. It looks like the undertaker wrote the bulk of the information, but the medical examiner is the one who filled in the dates. Under age, the undertaker wrote 66 years, 5 months, 26 days. Since she was born August 13, 1855, that would make her death date February 9. Is it possible that the medical examiner got his months mixed up and no one noticed?

I spent some time trying to locate any other record of her death, so far to no avail. I searched for an obituary to try to get a newspaper date (if that obit appeared in January, clearly it would be wrong). It’s hard for me to imagine that both the obituary and the headstone are wrong. But it’s also hard to imagine the medical examiner not knowing what month it is.

I’m bound and determined to solve this mystery. I can’t wait to find out what the answer (and perhaps explanation) is. And when I do I’ll report it here!