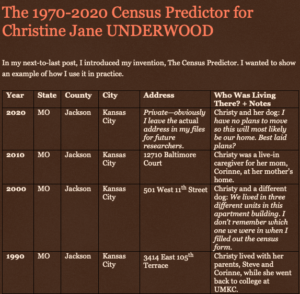 Just three more years until the 1950 census is released to the public! I bet you’re as excited about it as I am. But do you know where your family members lived in 1950? In the mid-twentieth century, people started moving around more, rather than living around extended family for decades on end. I suspect that will make census research a little more difficult for genealogists. (Here’s an article from the Oxford Encyclpedia of American Social History on 20th-century internal migration, if you’re interested.)

OYFH reader Christy Underwood, who writes the blog Shaking My Family Tree, gave thought to how future genealogists might find her and her family in the more recent censuses. She created a Census Predictor form, which she has filled out for her family members who were alive since 1950. She’s posting them on her blog as a roadmap for researchers who follow her.

She explains the concept here, but the idea is that she creates a table in Word for each family member, with rows for each census year, providing the state, county, city and address of the person at the time. She also includes a cell for notes.

Here’s Christy’s post with her Census Predictor for herself. (That’s a snippet at the top of this post.)

I think this is genius. Wouldn’t it be great if we all did it? I’m planning to give it a try as soon as I finish my current paper-purging project (which is coming along quite nicely).

Are you game for creating census predictors for your family? Are you already doing something similar? I’d love to hear about it!

Christy, thank you for inventing the Census Predictor and sharing it with the world on your blog. And thank you for giving me the green light to write about it here! 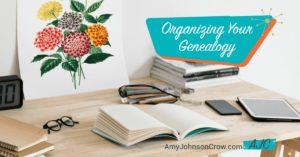 Do you listen to Amy Johnson Crow’s excellent podcast Generations Cafe? If you have read my blog for awhile, you know I’m a big fan of Amy’s. (Here’s her How They Do It interview on this blog from 2017.) She started her podcast in September and I’ve really enjoyed listening to it. So when she asked me to be a guest, to talk about genealogy organizing, I jumped at the chance!

The episode was published on Wednesday and I am really happy with how it turned out. If you haven’t already (I know Amy has a HUGE audience, so you may already be aware of it), please check it out by clicking on this link or subscribing to Generations Cafe wherever you listen to podcasts.

Thank you, Amy, for the opportunity to talk with you and your listeners! 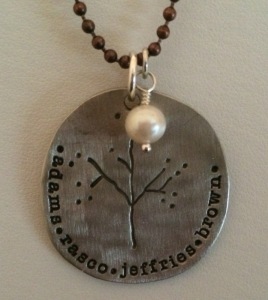 I’m not a big gift giver and I when I do give gifts, I prefer to give experiences, rather than stuff. (I see how hard it is for my clients to let go of items that were gifts and I don’t want to burden anyone with that.)

But I dearly love one piece of jewelry that I bought myself as a gift. It’s the Original Family Tree Necklace from Lisa Leonard Designs. She creates custom, hand-stamped jewelry. This necklace is meant for moms, I think, to include the first names of their children. But I chose to have my grandparents’ surnames printed on the necklace.

I think it’s pretty and when I wear it, I feel connected to my family. If you ever see me at a genealogy conference, you’ll probably see it hanging around my neck.

As the gift-giving season approaches, I thought I’d mention it now in case you have a genealogy lover on your gift list. It also makes a good gift to give yourself!

When I bought mine (pictured here), it was being offered in pewter. Now it’s in sterling silver (and therefore more expensive). Lisa Leonard offers discounts all the time. In fact as I write this, there’s a 30 percent discount available, which brings the price down to $90 for the shorter chains. I love mine so much I just had to share! 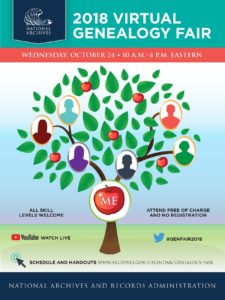 I almost missed telling you about the 2018 Virtual Genealogy Fair offered (free of charge) by the National Archives. It’s tomorrow, October 24. This is the sixth year for the conference, offered by webcast. It’s a wonderful resource.

You can read the lineup, with detailed descriptions of the sessions and links to handouts, here. Detailed descriptions of the sessions are posted here, which is also where handouts will be posted when they’re available. (Classes are marked either Beginner” or “Experienced.”) There will be six one-hour sessions, bookended by opening and closing remarks. The even starts at 10 am eastern and ends at 4.

Special thanks to my cousin, Jerry Brown, who alerted me to this year’s conference. It had flown beneath my radar this year.