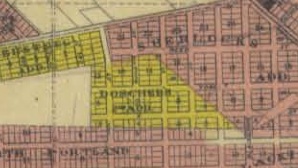 I’m in Portland, Oregon, doing some business planning my friend and colleague, Shannon Wilkinson. (This is something I try to do annually, and it really pays off.)

As I discovered earlier this year, my paternal grandfather, Dave Adams, was born in Portland. The birth announcement I found for him listed a street address for his parents, 749 Roosevelt Street. So I thought while I was here I might see if I could find the home his parents were living in when he was born on November 12, 1904.

Last night, after dark and in the fog, Shannon and I found ourselves near Roosevelt Street. (I had told her about it on the phone when I first found the birth announcement, and she remembered.) As it happens, due to the addition of freeways and an industrial plant in that area, only one residential block of Roosevelt street remains. So it was easy to narrow down our search.

However, some time in the 1930s, Portland changed its numbering scheme for its addresses. The block we were in was the 2200 block. My quest today was to find out whether the last existing residential block of Roosevelt happened to be the same block my great grandparents lived in.

Thankfully, Shannon is savvy about online resources available in Portland and she pointed me to Portland Maps, a city-run website that provides loads of information on each property in Portland. I had written down the address of one of the houses, so I looked it up.  I was able to click on historical permits on that house and the houses around it until I found a permit old enough to reveal the original address. I learned that 2354 Roosevelt was 780 Roosevelt back in the day. I clicked on the next house west and saw that it had been 782 Roosevelt, so I knew I was going in the wrong direction. Unfortunately, there were only a couple of houses east of 2354 Roosevelt, so it became apparent that my great grandparents’ house was one that was destroyed in order to make room for the freeway.

A look at the plat map of Portland in 1906 showed that the whole area had been residential. Shannon and I agree that the turn-of-the-century houses we saw in the last remaining block of Roosevelt probably are a good representation of where the Adams family had lived.

While I was ultimately disappointed in the outcome of this fun little research project, I’m thrilled to have a feel for the kind of housing my ancestors lived in 110 years ago. I’m so grateful to have this information available to me at my fingertips but also glad that I saw those houses in person.

Incidentally, I used the Research Tracker in my Family History Organizer notebook in Springpad (available to you by clicking here) to track this project. I’m finding it a really easy way to keep track of my research without feeling overwhelmed by a big spreadsheet. 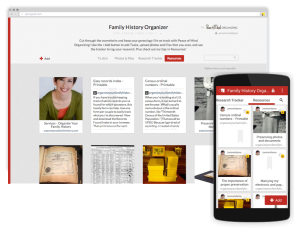 I’ve become a fan of Springpad, a personal organizer app for the web and mobile devices. I use it to manage tasks and keep track of things like books I want to read and have read, movies, and wines. So far, I’m just scratching the surface of its functionality, but I really am loving it. I wrote on my Peace of Mind Organizing blog about how much I’m loving their Task Notebook.

To me, Springpad feels like Evernote meets Pinterest. I find it intuitive, easy to use, and visually appealing.

I am thrilled to announce that I’ve partnered with Springpad to create a digital notebook that’s customized to help you organize your family history. Called the Family History Organizer, it has these features:

I created the research tracker because I have a hard time sticking with a proper research log. The research tracker is light version of a research log, but I think the information it captures will be helpful. Just copy and paste the template headings into a new Note within the Research Tracker tab at the conclusion of each research session and you’ll have an easy, accessible record of that session.

I’ll update the resources section of the Family History Organizer when I come across great resources (or when I want to share a particularly useful blog post).

I hope you’ll check out this custom notebook. If you’re interested in information and tools about organizing in general (not just genealogy), I also have a notebook called The Habit Maker. This is all part of Springpad’s Operation Organization campaign in which they’ve partnered with a small group of organizing experts to create a dozen or so of these notebooks.

If you try out the Family History Organizer, please let me know if you have any questions or feedback!

I wrote last year about the importance of keeping a research log and my intention to keep one. I still think it’s important. Despite that, I’m still not really keeping one.

Oh, but I wish I were. My grandfather’s grandfather was George Washington Adams. I had accumulated a certain amount of information about him–and I’d recorded sources for everything. But now as I revisit him, I’m starting to doubt whether the military sources I found are necessarily for the right guy. And I think if I’d been keeping a good research log, I’d have perhaps written down why I was so certain that the George W. Adams from Company A, 35th Kentucky Infantry (Union), who ended up in the National Soldier’s Home for awhile in the 1920s and 1930s was my great great great grandfather. But looking at it now, I’m not so sure.

So I’m going to go back to all the data I’ve gathered for him and cast a critical eye on what I’ve found and make sure that I’ve got the right guy. And I’m going to carefully record my efforts and my reasoning for every fact. I’m not pledging to start keeping a research log for every bit of research I do (though I hope to at some point). I’m just pledging to do it for this one ancestor.

Once I figure out if I have the right guy, I’ll write here and let you know! 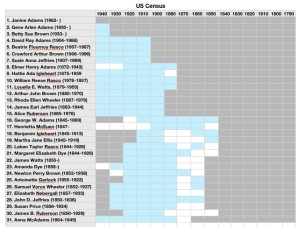 My memory is not what it used to be. And I’m finding the more family history research I do, the more I’m duplicating effort. In the process of researching one person, another person will pop into my mind. I’ll look for a record for that person, rejoice in finding it, then realize I’d already found it!

So in an effort to avoid that, as well help me in my never-ending quest to not feel overwhelmed about my genealogy research, this past weekend I created a series of progress-tracking spreadsheets. I was inspired by Miriam’s Census Spreadsheet, which is a Google Doc. I’m a Mac user and I used the Numbers program (similar to Excel) to create three spreadsheets (so far) that track progress, by ancestor, on finding the following records:

On the first table (pictured above) I have a row for each ancestor (this is a work in progress…I’ve been adding info a generation at a time and up to my great-great grandparents), and a column for each U.S. Census. I fill in the square in blue if that record was found. A grey square indicates the ancestor wasn’t alive for that census. A blank (white) square indicates I still need to find this record. I also have a table of state censuses, so I can note those.

Here I track what military records I’ve found for each ancestor, by war or conflict. This one’s definitely a work in progress.

Going through this process helped me realize how much census work I’d done and how much more work I had to do to find birth, marriage and death records. I think these charts will help me feel a sense of accomplishment and also help me hone in on work that needs to be done. I’ll keep adding ancestors from Reunion, until I’m caught up, and then plan to keep up with the spreadsheet as I find more records.