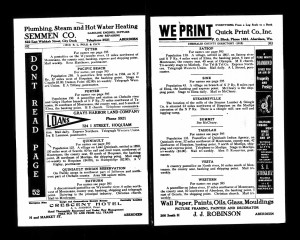 An individual’s entry in a city directory can provide some great information (depending on the year), including:

Tracking an ancestor’s address from year to year can be really revealing.

I was thrilled to see in the 1912 Chehalis County Directory paragraphs about each of the towns in the county. About Quiniault (now spelled Quinault), which is the town that my grandfather and his parents were living in that year, I learned this:

That paints a picture of a very remote place, doesn’t it? Quinault is located on the Olympic Peninsula in Washington state. The occupation of my great grandfather, Elmer, was listed as farmer. I can’t really imagine what life was like there in that small town, so far from everything, with four small children.

One thing I’ve come to realize about city directories, however, is that offer a snapshot that may look very different than reality. For example, I know from my grandfather’s letter to my grandmother that his parents did not live together in Olympia.  You would not know it from the Olympia city directory, where both Elmer and Hattie are listed at one address year after year. Similarly, my parents are listed in the Spokane city directory in 1954. I know that in fact they were stationed in London at the time. (My father was in the Army.) So as much as I love finding an entry in a city directory for one of my people, I’m learning to not take the information as gospel.

I’m not sure how I happened across the website MapofUS.org, but it seems like quite a find for history and map lovers, and, of course, family history researchers.

The site consists of links to many, many high-resolution historical maps of the U.S. (and a few other countries), as well as a small selection of battle maps for the Revolutionary War, and Civil War maps promised to come soon.In addition, there is a Historical  Atlases section, which provides some city maps as well. I was able to see 1852 and 1880 maps of St. Louis, where I live. They were fascinating.

It also offers an interactive U.S. map where you can watch the territories and states as they’re established throughout time. Each state also has an interactive county map.

The maps are available free of charge (at this point anyway). This seems like a really easy way to check county (and other) boundaries on various dates while you’re doing your genealogy research. 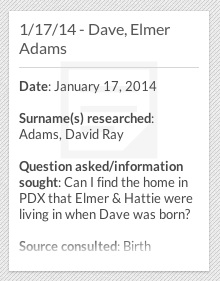 One of the features of the Family History Organizer custom notebook I created for Springpad is the Research Tracker tab. Since I started getting serious about family history research about 18  months ago, I knew I needed to do a better job of keeping a research log. I tried a spreadsheet, but failed to keep up with it. I think the problem was that I had so many columns to fill out, it felt overwhelming.

So when Springpad asked me to create this notebook, I requested a place to easily record research sessions. It includes headers that can be copied and pasted into a fresh note for each research session. (I made up the headers that make sense to me, but you can easily edit them so that you’re copying and pasting headers that work better for you.)

I’ve been using the Research Tracker for a couple of weeks and have found that it’s really helpful. I start creating a new note at the beginning of each session, which helps me identify the information I’m looking for in the session. I like that when I finish filling it out at the end of the session, I identify next steps in the research.

I think what I like most about it is that it’s simple and non-intimidating. It may not be as thorough as a formal research log, but it’s way better than what I was recording before (which was nothing). Since I’m trying to do research five days a week (or at least work on organizing my research), I have plenty to enter and am feeling optimistic that this will keep me on track.

If you’re interested in trying it out, simply download the Family History Organizer notebook into your free Springpad account. (Or learn more about the notebook before downloading.) 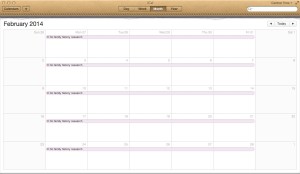 Finding time to do family history research is a problem for me. I bet I’m not alone! Even though it really is important to me, I’m having a hard time making it a priority. I was thinking about that problem recently and thought about how I’ve learned through the years that daily actions are easier to sustain then less frequent actions. Between this blog and my Peace of Mind Organizing blog, for instance, I try to blog five days a week. And, for me, that’s easier than blogging weekly.

Then it hit me. What I need to do is make a commitment to doing a little family history research, or a little organizing of my family history research, five days a week. It might be for only 15 minutes. But, as I tell my clients, a little bit of daily effort can make a big difference. Another benefit of daily effort is that you get into the habit of doing it.

This represents a shift for me–before, I think I was having trouble finding the large blocks of time I felt I needed. But I know that I can get quite a bit done in a short bit of time. (A timer really helps.) So now, knowing that I just need to squeeze in at least 15 minutes, I’m less overwhelmed by finding time and getting started. And since I’ve done research so recently, I have a better idea of what I want to work on.

I’ll be interested to see how this works out. I’m feeling very hopeful. I came up with this idea on Thursday of last week. So I did research on Friday (and blogged about it). This afternoon, I remembered my commitment, so I sat down and did some work. I have a feeling that this schedule will actually take some pressure off me!

P.S. Have you had a chance to take my poll on what types of posts you’d like to read on this blog? This will be my last reminder; I just want to give you a chance to express your opinion by taking the quick poll.